Going to the Dark Side: The Atlanta Braves All Star Break 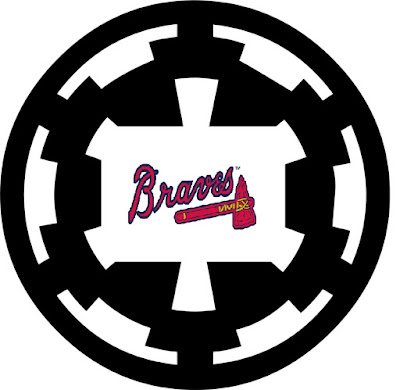 Well fans it finally happened. I've given up on our chances to get into the playoffs this season. I know, I know, many of you thought I was nuts anyway, but I honestly liked the way this team was coming together until this series in Colorado. We still have a game left, but we've lost the first three games against a team that's in dead last of their division, on the heels of being unable to sweep two series against teams that were just as bad if not worse. At the very least I thought we should go 7-3 in this stretch. We're probably going to go 6-4 at best, and we lost our best reliever last night to a season ending Achilles injury. Yes, we're 5 games out of the Wild Card and about that out of the division, but at this stage of the year, that's a large gap.

So why have I gone to the dark side after staying so positive for half the season? Here's why:

So that's it for me shaking the pom-poms about this team having a shot at the playoffs. I'm always realistic and will alway adjust to the situation at hand. I'm not afraid to tell you I was wrong, or change my mind on a team like other analysts who will stick to their guns in the face of overwhelming facts. That's not me. But I will say that many of them will crow about how they were right, and that this Braves team never had a chance. That's garbage. They absolutely had a chance until they lost their best players, and the numbers were bearing that out.

We have to switch modes now, and start looking at how this team finishes the season and who has a job in 2016. I want to see some of these young guys get shots at the MLB level, as they do tryouts for who can produce. I want to see if the Braves are committed to Fredi Gonzalez, or if they are going to move in another direction going into the new stadium. I want to see if this team continues to have heart and play with passion even though the chips are likely cashed in.

We'll see. In the meantime, it won't stop me from watching. I'm just hoping it keeps from getting as frustrated now that my expectations have changed.