Bullpen Execution: I'm in favor of it 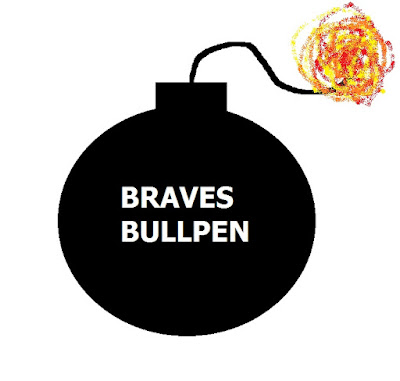 The Braves dropped two of three games to the Diamondbacks this week when they easily could have swept them if not for the bullpen woes. What's the common theme this year? Bullpen woes. Who is to blame for the Braves problems? That'd be the bullpen, Alex. When asked about his team's execution in a game, football coach John McKay once quipped, "I'm all for it." That's the titular joke, and wholeheartedly explains my feelings toward the pen right now.

To recap the series, since this is a combo recap and discussion of the pen, the Braves actually scored a ton of runs in the series. Atlanta put up 22 runs of offense, but dropped two games because the bullpen allowed a combined 7 runs in two games, and blew both leads late. Who was at fault? Jim Johnson, Cody Martin, Nick Masset, and Brandon Cunniff. Basically everyone except Luis Avilan, Jason Grilli, and Trevor Cahill.

Alex Wood was great in his start, allowing only 1 earned run in 8 innings on 7 hits. That was the lone win. Shelby Miller wasn't good at all in his start, allowing 4 runs in 4.1 innings, but you're allowed a clunker every now and then when your ERA was sub 2.00 coming in. Besides the game was in hand, and the bullpen allowed 3 more runs for the loss. Lastly, Folty was very sub-par in his outing with 5 runs, 4 earned, in 5.2 innings with 8 hits and 2 walks. That's just too many runners. I say it all the time, but you're rolling the dice whenever you put more than 1.5 runners on an inning.

The offense was gangbusters, but Freddie Freeman was the real story. Freddie hit not 1, not 2, but 3 homers in this series. He's suddenly busting out of his long slump, and he's hitting the ball like it is the size of a cantaloupe. If he can stay hot, he'll move up in the All-Star chase and might get into the last-minute voting again. That's where Braves Twitter can really shine. They do a good job of rigging a Twitter vote.

But the question remains, how do we fix this pen? Let's analyze a little where we stand:

OK, so just looking at the list of stats, I can tell you right now that Avilan, Johnson, and Grilli are staying. Cody Martin is extremely questionable, but he's been used a ton so I send him back down anyway. Cunniff probably needs more outings, his problem is he got scortched lately by Arizona and SF in two games. Otherwise, he's had some really good outings and his WHIP is way lower than his ERA indicates. I'd keep him in there. Trevor Cahill is a mop-up guy and we're paying him too much to outright release him. I'd never see him in a key situation anyway. He's only coming in the game up by 5 or down by 4 late. Nick Masset is brand new in a trade, and he deserves time in AAA, he's not ready yet. I'd send him down.

So let's assume you can fix some of this by sending down Martin and Masset. Here are your options in AAA for possible call-ups. David Carpenter (not the one who just got DFA'd by the Yankees) is a young Righty in Gwinnett with a 0.82 ERA in 16 games and 22 innings. I mean this should be a no-brainer unless the Braves are holding back on him for financial reasons. Another guy to consider is Aaron Kurcz, a Righty with a 3.20 ERA and 22 games of relief. He's 24 years old and probably a little young to throw into this spot, but we're desperate. If you want another option, you have an aging vet in the pen named Carlos Fisher, who is essentially another Donnie Veal type option with the exception that you hope he doesn't suck like Veal at the top level. He's had 98 innings in the majors but none of them were much better than Martin's, so I'm not sure you'd want to make that move.

Looking at the free agent market, there's one major option. David Carpenter from the Yankees got DFA'd because he had a 4.82 ERA, but really 6 of his 10 earned runs on the season came against Baltimore and Toronto on the road. Toronto is the #1 offensive team in baseball, and the Orioles at home have a 17-13 record despite the fact they are in last in the AL East. So I consider those to be pretty big outlier situations. I think the Braves would be stupid not to consider signing Carpenter to another minimum level deal after the time expires.

So my solution right now is to make a combo of moves. Send down Martin and Masset, and bring up a mix of Kurcz, Carpenter, and sign another Carpenter. We could have two relievers named David Carpenter on the roster. Imagine the insanity!

Either way, we need to fix this fast, because the Braves could be leading the division if not for the pen right now.