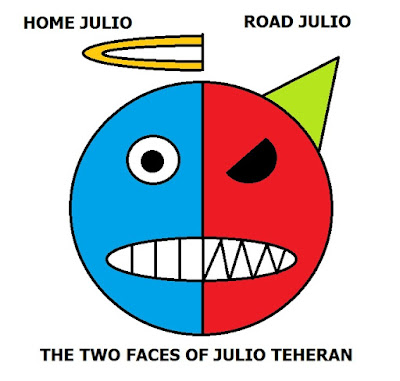 When you go 1-5 on a road trip, you can't be happy. I'm not happy. I'm not exactly pissed off given that I knew exactly how ugly this thing could get without Freddie Freeman, but I'm not happy. I'm middling between tapioca pudding and vanilla pound cake. I'm in a bland state of sugary meh. Plus I think Julio Teheran might be completely bi-polar, and the Hyde portion of his personality travels with the road team.

Game 1 - Williams Perez was rolling right along in this game until he got injured with a liner, and now he's subsequently on the DL for 15 days. Because life is fair like that. He went 4.2 innings and allowed 2 runs, but in reality he allowed 0 runs while he was actually in the game. The runs he was credited with came because Avilan couldn't get a single out before the Pirates plated 2 runs on 2 hits. But still, Uribe tied the game with a homer in the top of the 6th, so all was not lost. Then, the problem was the Braves offense was so bad they only got a runner to second once in the rest of the game. And the game went 10 innings. Braves lost in extras 3-2.

Game 2 - Road Julio showed up, just like clockwork. Road Julio looks like he's pitching covered in maple syrup. Everything is slower, sticky, and right over the middle of the plate. Julio gave up 9 hits, 6 runs, in 6 innings on 101 pitches. It wasn't like Freddie Gonzalez yanked him either. He just left him out there to twist in the wind. I'm actually in favor of that, because I'm tired of the bullpen having to clean up a starter's disaster. Let him eat the innings. The Braves had ZERO chance of winning this game after the first inning when they went down 5-0 anyway, so I guess you can take some solace that Julio finished without too much more damage. That being said, I don't give away medals for getting the car to the repair shop after the engine falls out. Braves lost 8-4.

Game 3 - Alex Wood really deserves a ton of credit for this win. Alex pitched 7.1 innings of shutout ball when the Braves needed it most, because they weren't doing much offensively. They finally broke through in the 5th inning when Markakis singled home Maybin, and then again in the 7th when Peterson jacked a 408 homer to center. Turns out the Braves needed that insurance run as Grilli had a tough time nailing down the save, and Maybin collided with Perez in the outfield allowing the Pirates to score a late run. Still, Grilli rallied back and got the save, and the Braves won the game 2-1.

We lost the series so no reason to do an MVP, but honorable mentions go to Alex Wood for his shutout peformance and Jace Peterson for his 4 RBIs in this series. Jace was probably the only guy who could hit with RISP, plus he bagged a homer. Nice job Jace!

Next up the Braves face the Nats again. Get ready to watch people jump off the bandwagon like rats from a sinking ship. Don't be those fans. Be positive. I'll give you a reason why in the preview tomorrow.