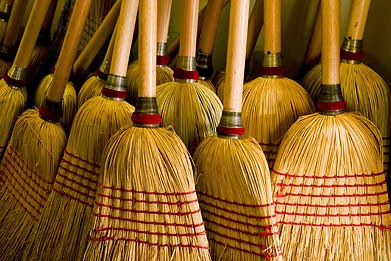 Are those? THEY ARE! It's the brooms! Remember good brooms? It's been a while. Man what a series! Can you remember a better series this year than this weekend? I can't. Well maybe that other series when we swept the Marlins on the road. Do you realize that the Braves are 6-0 against the Marlins in their ballpark? Apparently hideous lime green makes our hitters go into full Hulk-mode.

Game 1 wasn't really about the pitching, but Julio Teheran did a good job keeping things close for 5.2 innings, giving up only 2 runs on 9 hits. I wasn't that impressed with his outing though, because he allowed so many base runners, and he was always in trouble. No, the real hero of the game was Julio Teheran the HITTER. Julio managed to scorch a ball up the middle in the 2nd inning, scoring both Todd Cunningham and Cameron Maybin. That would give the Braves a 2-1 lead. Then Stanton homered to tie it 2-2. Maybin would double in Cunningham in the 4th to make it 3-2. Then Stanton homered to tie it 3-3. Stanton was trying to ruin everyone's fun. But the Braves offense would not be denied as Cunningham knocked in Markakis in the 8th, and Bethancourt advanced to 1st on a wild pitch that scored another runner in that same inning. Braves would win 5-3.

Game 2 wasn't really about pitching either. Alex Wood did well to allow just 2 runs, this time on 7 hits in 7 innings, but the criticism was the same. Too many base runners for that kind of effort. Especially considering what happened in the 2nd inning. Allow me to set the stage. Simmons led off with a double in the second, and AJ singled him in to take a 1-0 lead. Then Cunningham and Maybin both singled to load the bases. Alex Wood struck out bringing Jace Peterson to the plate. Peterson had no major league homers coming into this game. But in this AB, Jace laced one to right field 416 feet for the grandest of all the homers. Just like that, the Braves were up 5-0, and the Marlins basically folded their tents. Braves went on to win 5-3 because Grilli made us a little nervous with his save.

Game 3 absolutely WAS about pitching. And what a performance it was. Let's get the offensive part out of the way first. The Braves again had a 5-run 2nd inning, but this time they did it on a parade of hits rather than one large shot. 10 batters came to the plate in the Braves 2nd, and with the way Shelby Miller pitched it might as well have been just a one run game. Because Shelby was masterful. So masterful in fact that he was one out away from the first Braves no-hitter since Kent Mercker in 1994. Unfortunately, Justin Bour broke it up with a single to center with 2 outs in the 9th inning. One thing to remember is that the no-no bid could have been over in the 3rd inning as Alverez beat out a throw to first, but the Braves challenged and won a very close call. I still think that was too close to overturn, but we caught a break. Either way, Braves won 6-0 and Shelby went the distance for a complete game shutout.

Three Things I Loved This Series:


MVP of the series is a tie between Shelby Miller and Todd Cunnigham. I honestly would have given it to Shelby straight up if he gets the no-no, but since he didn't he and Todd can share with his paltry 8/12 series. I mean come on Todd, you made 4 freaking outs. Be better.

Next up the Braves get Tampa at home for a weird interleague 2-game series. I hate everything about it. I hate interleague, I hate 2-game series, and I especially hate that it happens in the middle of the week when we had an open day on Monday. Just play 3 games MLB. It's how baseball is meant to be played.