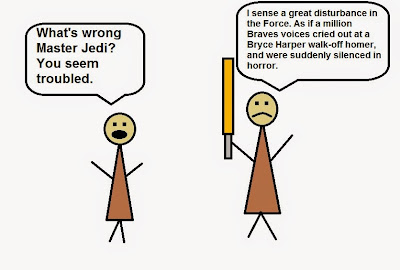 Remember at the beginning of the season when we made all these trades, and everyone was crying about the lack of offense? Remember how people thought we'd lose 100 games because we traded away the entire outfield? Remember when everyone wasn't sure why we paid Nick Markakis, like he was some scrub who couldn't hit? But the pitching wasn't a huge concern.

Those were fun times. What we didn't see coming was this disaster on the mound. The Braves haven't faced a pitching crisis like this in what seems like forever. But man, if you look at the staff right now? It's a complete unmitigated disaster from the starters all the way to the bullpen. Very little is going right for the Braves on the mound, and it all seems to stem from the fact that the starting rotation can't get deep into games. That stresses the bullpen, and things just unravel from there like a cheap knock-off handbag purchased in a Shanghai back alley.

How bad is it? Allow me to explain.

The Braves team ERA right now is 4.44 which puts them 13th in the NL. The only teams behind them are Milwaukee (who fired their manager in the first month of the season, and is already 12.5 games out of their division), and Colorado (who plays in the biggest home run scoring park in the MLB thanks to being so Rocky Mountain High). That's not great company Braves. That's not exactly where we want to be, ever. But it gets so much worse.

The Braves haven't finished the season with a team ERA over 4.40 since 2008. They finished that season 12th in the NL, went 72-90, finished in 4th place, and were 20 games out of the division behind the Phillies. The starters that year were Jorge Campillo, Jair Jurrjens, Tim Hudson, Jojo Reyes, Charlie Morton, Tom Glavine, and Mike Hampton. And not the good version of Glavine, either. That was the end of the road, should have been retired already version of Tommy.

What's even worse than that? THE BRAVES ARE HITTING! We're wasting great offensive efforts by a team that wasn't supposed to be good at offense. But no, Atlanta is scoring 4.43 runs a game. We're basically even with the terrible pitching, which is why errors and unearned runs have been the difference in a sub-.500 record so far. The Braves have a run differential of -8 right now and they are 5 games back in the division. They have to start pitching if they want to get out of this whole. If the team hit like this in 2014, with the pitching we had, we'd have won the division hands-down! That's the infuriating thing.

So who is the problem? In ascending order from least problematic to biggest problem, I'll order them like this:


We need to fix it. I'm not even sure how, but the mainly I'm just ready for somebody besides Shelby to man up and eat innings even when things go wrong. I don't think we're going to blow anybody's arm off if they pitch 120 pitches instead of 100. But something needs to change, and it needs to change fast.