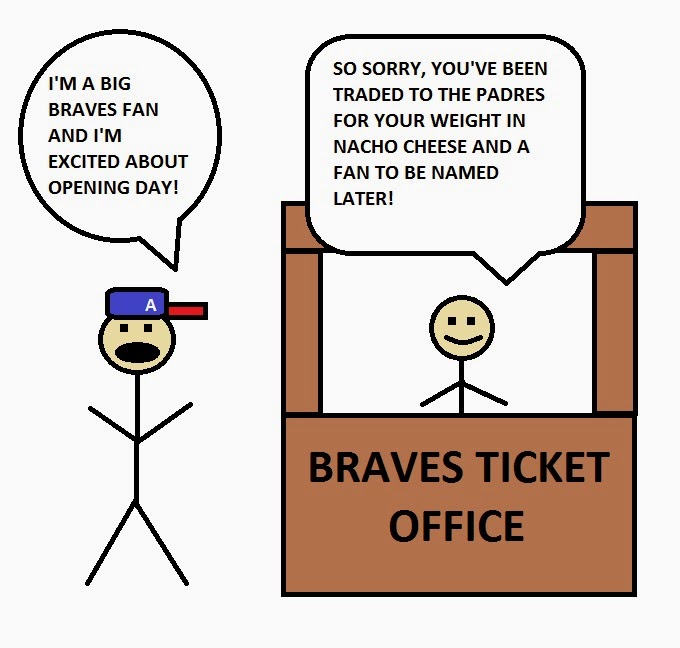 So I tune into Twitter yesterday and it was like an Irish wake mixed with mosh-pit. Just a bunch of wailing and raging and not much celebrating about opening day. Look I understand you're pissed off. Kimbrel was a hometown favorite and he was the best closer in baseball. Losing him for many Braves fans is like completely giving up on the season. However, when you let the dust settle, and you look at this trade as a total team and business decision, it's an absolute steal for the Braves. And I'll tell you why.

Let's say you're one of those people who believes the team was going to stink, and that this was a total rebuild. If you're in that camp, what did you expect from Kimbrel? To save maybe 25 games? When you lose your job and you need to rebuild your house, you don't hold on to that Ferrari you have sitting in the garage. You sell it and you start over. You'd be crazy to hold onto that showpiece when your world is crumbling around you.

If you believe like me that this team has a chance to be a playoff contender, then the loss of Kimbrel shouldn't concern you all that much either. Why? Because closers can't win you games. Repeat, simply having a closer in the bullpen CAN'T win you a game. He can finish a game, but having Kimbrel wasn't going to suddenly produce a whole bunch of more offense, and he wasn't going to pitch 6 innings a game. Closers are specialty players, and I can argue that they are highly overrated by fans.

Take the time and read that article about closers. Not only is it well written, but it also exposes some simple things about the end of baseball games. Chiefly, it's that throughout baseball history when a team leads the game going to the 9th inning, they win on average 95% of the time. That's even before baseball closers became a thing, or saves were even tracked. An average guy on an average team is going to win more than most of those games, simply because of the math involved. It's pure odds. A team is going to have to overcome some big odds to win a game late with only three outs.

So just stop with all the histrionics about losing Kimbrel. We can get another guy to close games and we will be fine as a team. What we weren't going to be able to get over was BJ Upton's hideous contract, and the Padres have agreed to eat it all. That's phenomenal. John Hart just convinced the Padres to eat a whole road-kill sandwich by putting some Kimbrel BBQ all over it. Nobody else would have made this deal. The Padres shouldn't have made this deal, and mark my words they will absolutely regret it.

What did the Braves get in return? By all accounts it opens up $53M of salary, which will be huge for this team as they retool the offense and the rotation. What else did they get? Carlos Quentin who they will DFA immediately since he sucks but is less expensive, a major pitching prospect in Matt Wisler, and an outfield prospect in Jordan Paroubeck. The other kick-in was current MLB outfielder Cameron Maybin.

Maybin is an interesting option. He was pretty solid in 2011 and 2012, but then he got paid in 2013 and immediately went into the crapper after getting injured, and then again after he was suspended 25 games for using amphetamines. However, looking at this numbers he has the potential to be a .250/.310/.365 slash line guy that plays some good defense in the outfield. So, who knows? We'll likely need an outfield platoon anyway, and I like having plenty of guys to play the hot hand. The good news is that Maybin is fast and he can swipe bags as a pinch runner late in games off the bench.

The prospects are pretty great too, but the clear prospect winner is Matt Wisler the pitcher. He's a top 50 prospect rated by most services, he's 21 years old, and he's probably going to get another year at AAA to settle into the starter role before getting a call up to the majors. The Braves will need him too, because after this year the rotation is looking pretty thin and I don't think Mike Minor is part of the long term plan.

I'm not telling you to stop being mad that the Braves traded a guy you like. All I'm telling you is that this trade is absolutely in the best interest of the team, and you absolutely will see the benefits of it as the Braves continue to move forward with their long term plan. Plus it gives you a chance to fall in love with some new faces, and possibly find out how much you like this new look Atlanta team.