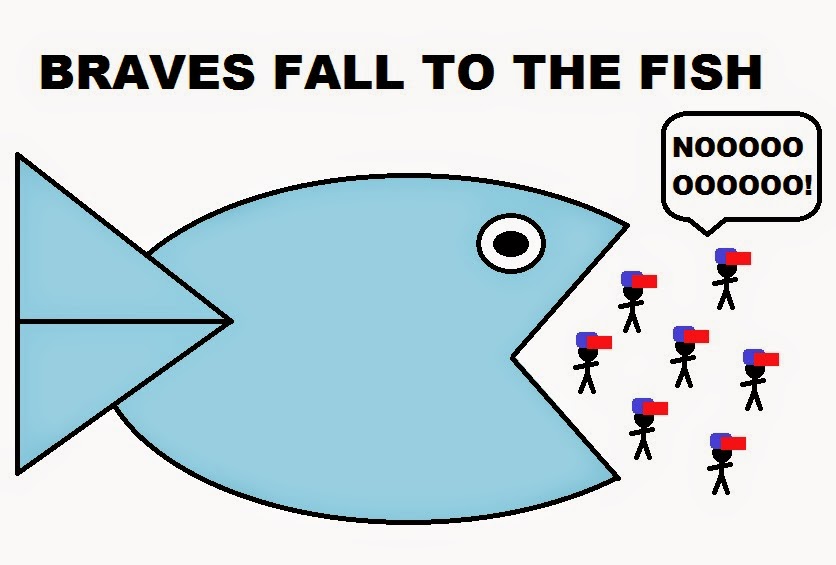 The Braves are now sporting a 6-3 record after a bad home series against the Marlins. Some fans are already in panic, and some analysts are smirking about how the Braves are returning to their expectations. If you're one of those people, please take a moment and cram that stuff up your rear. Rooting against your team because you predicted them to fail, or panicking while both A - your team is above .500, and B - we're not even to Memorial Day is asinine. So calm down.

The truth is that our 4-5 part of the rotation is not great. It likely will get better, or the Braves will make some changes. But they certainly won't make changes with guys that have less than five starts under their belt in the season. You have to allow Roger McDowell time to make his alterations and work with the new starters.

Game 1 was a rain soaked affair that I actually attended. Sort of. I did show up to the game and the immediate 30 minute rain delay. Then I stayed for three innings and the next rain delay. At that point it was past 9PM with 6 innings left and at least a 45 minute delay to go. I left because I have a job. The Braves won anyway thanks to a solid 5 innings of 1 run ball by Shelby Miller, and a 5th inning flurry of offense led by Callaspo and Markakis. Braves took the game 3-2 even though Jason Grilli had some trouble in the ninth nailing down the save after allowing this first earned run of the season.

Game 2 was Trevor Cahill's first outing of the year. It went...poorly. If you can imagine a game of coach pitch, but the dad is slightly drunk and looks like he's about ten years out of his prime? That's pretty close to what happened. It was 4-0 and Cahill had given up 9 baserunners before the third inning was even over, plus he walked in a run. Fredi Gonzalez had to yank him in favor of Sugar Ray Marimon, whom I previewed in my previous Who the Heck Is That Atlanta Braves post. Sugar Ray had a good outing, and went 4 innings giving up only 2 runs. Better than Cahill at least, and Marimon is an MLB rookie. Either way, it just got worse from there on the way to an 8-2 Braves loss.

Game 3 was a day game where Eric Stults got his second start of the year. Considering the lifetime averages of the Marlins against Stults, I was expecting a disaster. I got a mild earthquake. Stults gave up 4 runs in 5 innings, so he was slightly better than Cahill in that he took longer to achieve a crappy result. The Marlins then touched up the bullpen for two more runs, but the game was long decided. The problem with small ball offense is that when you spot a team four runs, you're basically boned. Oh but the Cameron Maybin and Kelly Johnson both randomly hit solo homers in the game, so if you had them in FanDuel you're happy. The rest of us were just mad the Braves lost 6-2.

Here are the three things I liked about the series:


MVP goes to Sugar Ray Marimon for not only his pitching performance by escaping the bases loaded jam in his first ever major league inning. No, no. He also came up in the bottom half of the inning and got his first ever hit. I'm not sure how often a pitcher has ever gotten his first strikeout and his first hit in the same inning, but I bet it's a pretty rare club.

Maybe next time Sugar Ray will be in a game with a chance to win.