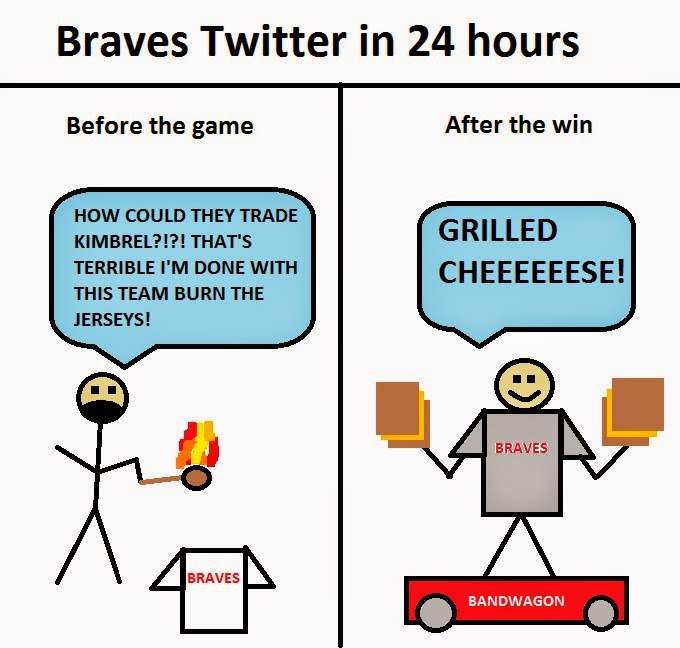 One of the reasons I like Twitter is that it's totally ridiculous and overtly reactionary. Your opinions can look very stupid literally 30 seconds after you post them during a baseball game. WHY DID FREDI GO TO AVILAN, MORON! One minute later that becomes: YEAH 5-2-3 DOUBLE PLAY OMG BRAVES ARE BACK!

It's like watching a bunch of twelve year olds high on meth driving bumper cars, in 140 characters or less. Which is why I enjoy it but rarely get wrapped up in it. Because really when you get down to it, Twitter is supposed to be about silly fun, not predicting the future, or declaring your massive intelligence. Still, I had some fun with it over the last 24 hours.

The Braves played the first game well, not great. They scored some runs, moved some runners, got some hits and looked very fast on the paths. I'll do a full recap after the series is over. That's all for the best because the Braves are going to need to play proverbial small ball to compete. Combined with solid pitching, that's probably going to be the most key thing about this team's success.

Julio Teheran looked pretty good coming off a spring where he looked pretty bad. Shocking how little that matters, as I covered in my Julio post earlier in the month. Next, we get to see how Alex Wood looks, and frankly I expect him to look pretty good. He had a blistering start last season in the month of April, but the Braves couldn't put two runs on the board. Seriously, he lost two games where he went 8 innings each giving up one run.

But also reflect that the Braves were one pop fly from possibly losing that game. They had to have Avilan put out a bases loaded fire with no outs. They had to have Johnson shut the door. They had to have Grilli get the one-run save. The bullpen that I have questions about looked really solid in their first game, but that's only one test. There will be likely 150+ of those, and if you get into bases-loaded-no-out jams enough, the odds tell you that you will lose those battles.

Don't go nuts. Leave that to the professionals like me.