Braves give up 30 runs in Nats Series 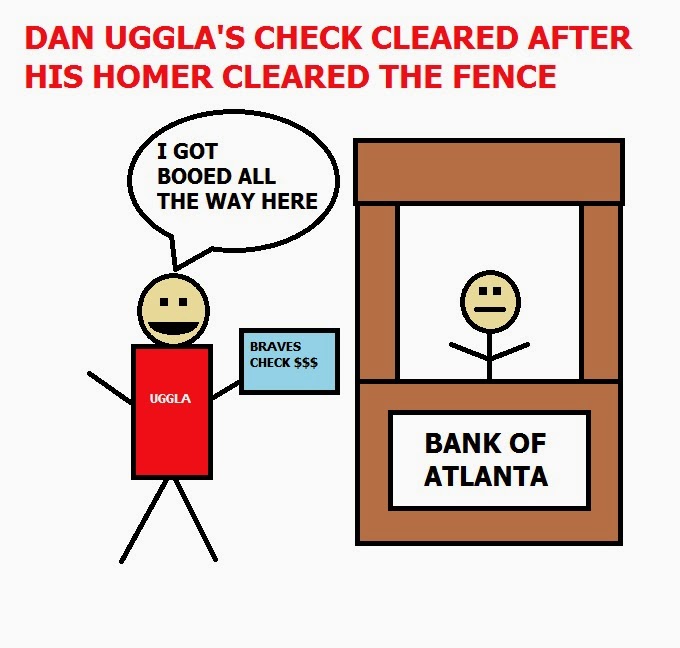 The Braves played terribly against the Nationals. The pitching staff was a giant ball of refuse soaked in moonshine and set ablaze as it rolled unchecked down Hank Aaron Drive. Nothing about the pitching in this series was positive. However, the Braves offense was very positive, and even though the defense gave up 30 runs, they still managed to win a game. Small miracles and Amy Grant songs.

Game 1 was the game we won. The Braves really turned on the offensive jets as they scored eight runs in the match. Kelly Johnson had a huge day as he went 3/4 with 3 RBIs, and a homer. Even Peterson who has been struggled at the plate when 2/2 with a walk. It was all going right for the Braves, except the pitching. That should have been a warning sign. Stults was fine, he went 6.1 innings with 2 runs, which is a quality start. But then the bullpen came in and gave up 2 runs 3 innings. Bad omens.

Game 2 was the one we'll all remember for a long time. Allow me to set the stage. The Braves are facing a young buck fresh out of AAA named AJ Cole. They proceed to demolish poor Mr. Cole to the tune of 9 runs in 2 innings. In essence, they gave him a welcome to the big leagues moment. I kept reminding people on Twitter, feel bad for a guy after you win and the game is over, until then there's no such thing as too many runs. Holy crap was that ever true, because our pitching staff lead by Julio Teheran kept putting on the leadoff man. The Nats whittled down the lead from 8, to 7, to 4, to just 3 runs before finally Fredi yanked Julio. Then Avilan came in and gave up 3 more runs. The Braves scored one of their own, so what was a 9 run lead was down to just 1. But the Braves scored again and made it 12-10 going to the 9th. That's when Dan Uggla came to the plate with two runners on and one out. Instead of rolling out the traditional Dan Uggla double play, he crushed a Grilli fastball into next week, and the Nats won the game 13-12 in a stunner. We got Uggla'd. Trademark that.

Game 3 I barely watched because the Hawks were fighting for their life in the playoffs. But the pitching was just as bad, and the Braves gave up another 13 runs. Lost in the shuffle here was the fact that AJ Pierzynski is hitting like a madman, going 6/11 with 8 RBIs in the series. Oh and Freddie Freeman is back to crushing the ball going 8/13 with 4 runs scored. That kind of crazy hitting should win you games, but alas, the pitching was the clownshoes effort we saw in all three games. Alex Wood gives up 5 runs in 5 innings, then for some reason we bring in Cahill from the bullpen because he's too terrible to be a starter, and he gives up 4 runs in 2 innings. You know what Cahill should be doing? Sipping fruity drinks with hats on an island somewhere in retirement. Because he can't pitch anymore in this country.

We lost so here's 3 things I hated about this series


The NBI goes to the bullpen. All of it. Get it together you goofballs. We have the 28th reliever ERA in baseball now. That won't fly with the kind of team we have on the field. We're not supposed to be bailing you out with offense.

Next up, we face the Reds. How are they doing? Standings say they are also 1 game under .500 with the same record we have. Should be interesting.