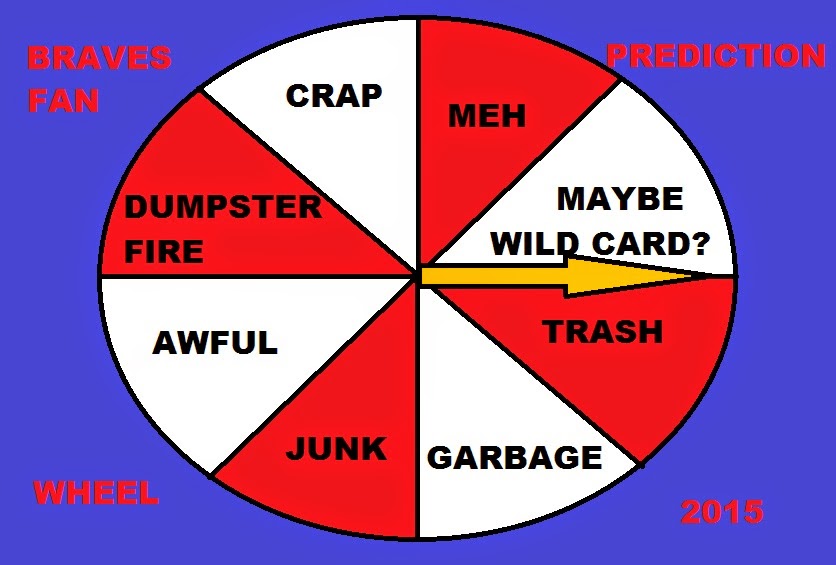 UPDATE: 4-5-2015 7PM, The Braves traded Kimbrel and BJ about an hour after I posted this, so just remove the parts where I talk about them. Not that I really did other than say I didn't think BJ would play much. Guess what? He won't play at all. I'll address the trade in total in my next post as I digest the money consequences.

It's Easter Sunday, and the Braves start playing real baseball tomorrow. I'm excited! Are you excited? If you're not and you're reading this blog, how did you end up here? Looking for Browns by the Numbers? Are you a filthy Cleveland fan? Google failed you.

With those two diametrically opposed viewpoints in mind, it's my job to come up with some predictions for the season. You'll laugh, you'll cry, you'll call me horrible names in tweets that would make the Easter bunnies sad. Think of the Easter bunnies won't you? So without further ado, here are my predictions in increasing order of how crazy you will likely think I am.

The Braves will win 88 games and get the Wild Card - The over/under in Vegas is 74.5, and analysts everywhere will tell you how this team will finish in the bottom half of baseball. But remember, these same analysts will typically just look at the high payrolls teams every year or the big markets and pick them to win. It's why they have been picking the Dodgers, Nationals, and Cardinals to win every freaking year. Let's see who they picked this year?

It's amazing that they picked all the teams that won the divisions last year! Who would have guessed? I honestly didn't even look those up until I just typed them down, and I still could have predicted it, because national analysts don't actually think. They just parrot out the same crap over and over until they are right.

Baseball isn't that easy. Random things happen. Teams get hot. Pitchers suddenly round out where they hadn't before, and top notch pitchers suddenly have bad seasons. But moreso than anything, baseball analysts put very little value in a team without a ton of sluggers or big-named Aces. And there is a good reason for that because they are playing the odds. We're a society built to love the long ball even after the offense has waned and low-scoring games are more common.

I put my faith in great rotational pitching and solid day-to-day hitting, much like the Royals had last year. KC was 19th in overall team slugging, but they managed to win a lot of games with the 4th best team ERA in the AL. San Francisco wasn't a bomber team, middle of the road in runs and slugging, but their pitching carried them as well with guys like Tim Hudson and Madison Bumgarner. And those were your World Series teams.

So to me, it's not about big names or home runs. It's about a bunch of guys doing their jobs on a day-by-day basis, and having one of the best pitching coaches in the business round out a rotation. It's about putting the ball in play instead of constantly striking out and sucking the air out of the building. It's about being able to get a bunt down instead of waiting for the three-run homer to show up every day. In short, it's about getting back to what made Braves baseball great like in 1991. The Braves had one guy in Ron Gant hit 30+ homers that year. And they still went worst to first because of their great ability to leg out doubles, get on base, get runners in by putting the ball in play, and dominate on the mound with their starting pitching.

That's what I want to see again. That's what I expect in 2015 when others are expecting defeat. Well I can guarantee you one thing, there's not one guy in that clubhouse who thinks they are going to finish below .500 this year.