Atlanta Braves take 2 of 3 from the NY Mets 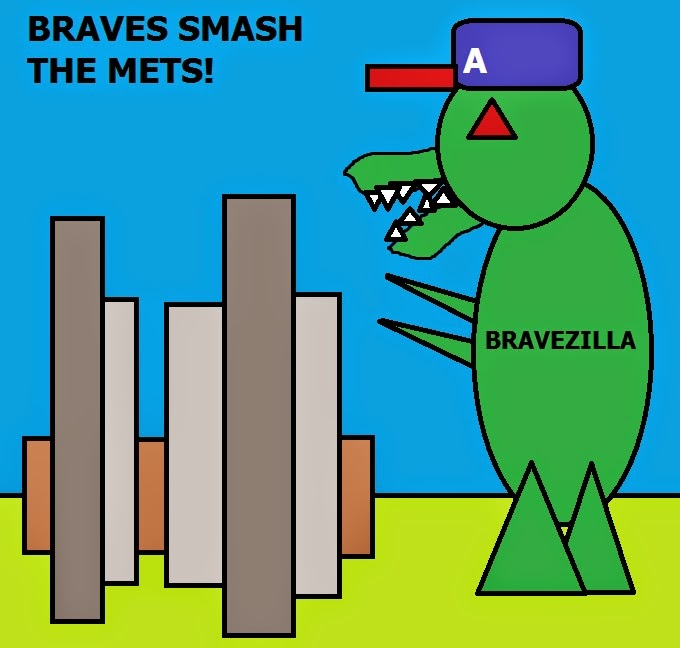 So we're not perfect? So what? I'm not perfect either anymore. I was for a brief time around 1999, but I blew it when I predicted that Y2K would cause the world to end. And yet here we are, world still spinning, my phone still works, and AI is slowly learning how to drive cars by themselves before they all turn on us like all the Terminator movies warned. WE DIDN'T LISTEN!

The Braves did lose a game and we're 5-1 on the season now. So no 162-0 for a team that many "fans" expected to lose 100 games. I know you're crushed. The good news is that we haven't lost a series yet! So let's recap what happened:

In game one, the Braves jumped on the Mets earlier with a lead-off Maybin homer, a Jonny Gomes RBI, and an error by the Mets SS that plated a run. That made it 3-0 Braves for the earlier part of the game. However, in the 4th inning ole David Wright did his best Anti-Chipper routine and jacked a two run homer, followed by a back-to-back shot by Mayberry. With the game tied, it came down to a battle of bullpens late, and the Braves emerged victorious when Goose Gosselin smacked a 2-run single with two-outs. Braves won 5-3.

Game two saw Julio Teheran dominate for six innings of shutout ball while the Braves amassed a 5-0 lead. Then in the 7th it went to pieces as Julio stayed too long in the game and gave up 3 runs. But the bullpen again put out the fire on the way to another 5-3 victory. Freddie, C-Beth, EYJr, Marky-Mark, and Simba all had RBIs in the game.

Game three was the one that got away. Braves got down early on a 2-run shot by Cuddyer, then the Braves tied it on Simmons 2-run triple. But unfortunately, the Braves gave up the lead again when the Round Mound of Downtown Bartolo Colon got his first RBI in 10 years. Yes, the pitcher. Yes, 10 years. If I didn't find the man so hilarious I'd hate him. Jonny Gomes tied the game again at 3-3 with a solo jack. Still, Fredi is gonna be Fredi, and Fredi makes stupid bullpen decisions. The manager brought in Juan "Who wants to walk the ballpark" Jamie to relieve in the 8th, and he gave up 3 walks and a run. Game over. Mets win 4-3.


The MVP of the series has to be Simmons. For a guy to really shine like he did going 4/10 with 3 doubles and a triple in 3 games? That's insane. Plus he threw out a runner again from literally left field. He can do it all, and we'll need him to do it all this year.