Atlanta Braves sweep away the Fish 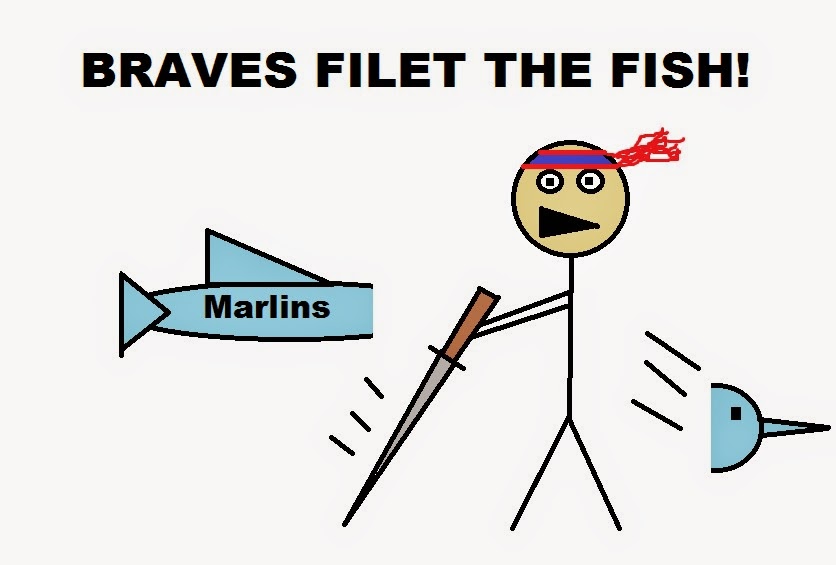 Wait, we won? AND WE SWEPT THE SERIES?! I was told by depressed fans, sports talk radio callers, and various national pundits that we would lose 100 games this year. Maybe we still will, but you know what? For this series those haters can lick a big crow-flavored Popsicle. I'm taking my joy where I can find it.

Game one was a nice pitcher's duel by Julio Teheran and Henderson Alvarez. Julio got the benefit of a couple of Braves runs though, while Alvarez just got the lonely one. That's even after the Fish loaded the bases with no outs on Julio, before the bullpen duo of Luis Avilan and Jim Johnson put out the fire. All in all, it was a tight game that ended with Jason Grilli getting his first save of the year, and putting a few minds at ease about his closer position on the team, winning 2-1.

Game two was an old-fashioned butt-kicking contest, and the Marlins entered a one-legged man. That's an old joke, kids. Because one-legged guys...they can't kick...you know what, nevermind. Moving on. The Braves won 12-2, and they did it without the benefit of a home run. Now last year, the only way the Braves would have scored 12 runs would be over 6 games and 5 Justin Upton long bombs. Now? It's station to station hitting along with a doubles parade all the way to the plate. Who knew? Small ball, if you can call it that, looks pretty fun.

Game three was a pretty boring affair that sat on a 0-0 tie until the 7th inning when AJ Pierzynski went yard off Tom Koehler. That would plate Freddie Freeman as well, and the Braves had a 2-0 lead. That's all they would need as Jason Grilli shut the door for the second save of the year, and the series sweep.

So in these recaps I'll do three things I really liked, and an MVP of the series. It'll provide some nice analysis and some consistency throughout the season. Away we go!


MVP of the Series: I think it has to be Jason Grilli for his performance in his first two save chances. The fanbase could have been reeling, but Grilli is a big reason why they've already had their binkie and a nap.

So with a sweep, the Braves are really looking to keep momentum going into their home opener with the Mets. Keep the line moving!