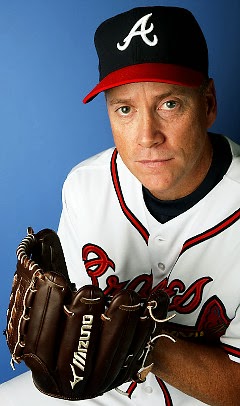 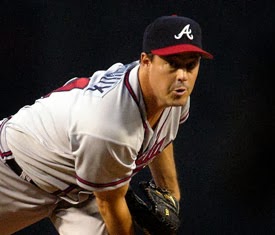 Two legendary pitchers of Atlanta Braves history are going into the Hall of Fame today on the first ballot. It's well deserved for both given their on the field performances. We're unlikely to ever see another 300 game winner the way rotations work now in the MLB, let alone how the Tommy John surgery has claimed season after season for young pitchers. Greg and Tom anchored a staff along with John Smoltz that helped the Braves dominate the NL East for over a decade.

Greg Maddux is the pitcher I think of when I think of the most accurate hurlers alive. Maddux could masterfully pain the corners with his fastball, put the ball exactly where the mitt was placed, and catchers would jokingly say you could catch the man with your eyes closed. He's the perfect picture of consistency, tendency, and baseball IQ. He knew hitters and knew how to confuse them. He knew where they would and wouldn't swing. He knew how to change speeds and go up and down the ladder at will. Most importantly, he was a stubborn bulldog who never wanted to give up on any pitch or any count.

Glavine was the classic young lefty who started with good speed on his fastball and later developed into the traditional "crafty lefty" that could beat you with a combination of the fastball and changeup. He would confused hitters at the plate and then catch them off guard with an array of other pitchers that included the curve and the slider. If Glavine were pitching today in his 20s, he's probably be as famous as Clayton Kershaw, or David Price. He would be the Ace that every team would want to pitcher first in the playoffs for their team. And Atlanta had THREE of those guys during the 90s with Maddux, Glavine, and Smoltz. It was an embarrassment of riches. It also shows you how much pitching matters when it comes to winning games.

One legend across all of baseball, Bobby Cox, was also included in the Hall of Fame this year, and we'll forever remember Bobby as the manager during these pitchers' tenure in Atlanta, as well as bringing Atlanta its only professional sports championship in 1995. Without that, the city of Atlanta would have absolutely nothing to be proud of except for a continuous streak of division titles. And let's be fair, we'd trade that for another World Series ring.

Those were the glory days of the Atlanta Braves. We're probably not going to win that many division titles in a row, nor will any other baseball team. But we do have a good shot at putting 3 dominant pitchers on the mound to win a World Series. The Braves have always valued good pitching over all else, and it shows by all these men making it to the Hall of Fame today. I congratulate them all as a fan and ticket-holder.