The Braves 2,548,679 in paid attendance in 2013. This is about 125,000 more people than the prior year of 2012, and the highest in Turner Field since 2007. Why is that important for the Braves? Because as we've seen in prior years, the contracts and payroll are highly tied to the gate. Who likes charts? I LIKE CHARTS! Here we go. 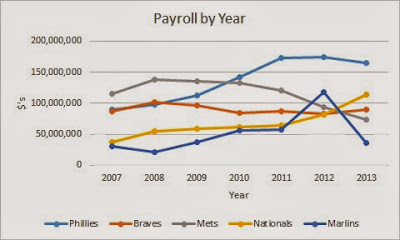 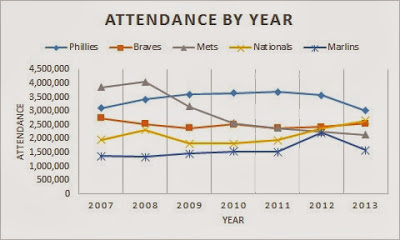 Now if you look at those two charts, you can see how there is a correlation between the payroll and attendance. The exception is the Phillies, whose payroll has exploded due to a series of bad overpriced contracts, and now they are floundering while trying to unload some liabilities in their 30s. Meanwhile, you can see that the Braves are pretty even keel. It's no accident that since 2007, the Braves payroll has stayed relatively consistent while the other teams have gone through some wild swings. You can certainly see how the Nationals became more competitive in that period as their payroll began to rise, leading to them winning a division. You can also see the Mets taking a nosedive in payroll and at the gate due to the Bernie Madoff stuff. You can also see the exact point where Marlins suckered their fans into a new stadium for a year, and then subsequently sold off the team. Because their owner deserves to be dealing art in Hell.

So what's the point of this? Well if you look at when the Braves had a payroll over $100M in 2008, that just happened to follow the best attendance year the Braves have had in a decade in 2007. You can watch as attendance feell in 2008, so did payroll in 2009. They are very closely tied for the Braves because our TV contract never changes, but the attendance numbers can drive team expenses. That means you may see an uptick in payroll for the Braves in 2014. How much exactly? Well we're pretty close to the 2008 attendance numbers, and they are looking to take on possibly an Ace contract, so you could see as much as $95M in payroll in 2014. Will Frank Wren do that? I hope so!