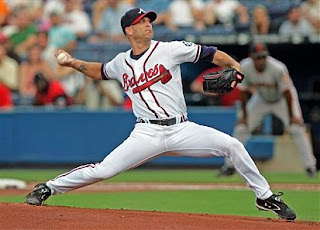 Huddy is leaving us for the West Coast, back to region where he began his career. We'll be losing a pitcher that spent 9 seasons in Atlanta, and anchored a staff that for the most part was very successful in that time. But the Giants are spending like morons and paying a 38 year old pitcher $23M for 2 years, until he's 40. I honestly can't say that makes baseball sense on its face, and the Braves certainly can't afford to unleash the limited wallet on a late 30s starter who might be a #2 or #3 in the rotation.

Still, it sucks to lose a guy who meant that much to both the Braves and the Atlanta community. Tim and his wife were involved in numerous charitable causes across the state, and he was impressive on the field as well. Tim amassed 113 wins, an ERA of 3.56, 9 complete games, 5 shutouts, and a WHIP of 1.24 in his Atlanta career. Those are pretty awesome numbers for a guy who was pitching most of that time in his 30s.

My memories of Tim will include his 7 innings of 1 run ball in the 2010 playoffs against the Giants, right before Kimbrel absolutely blew the game in a rare 9th inning disaster. I'll remember that Tim was the reason the Braves rallied back in 2012 after the 2011 collapse, and he had 16 wins on that season. I'll remember absolutely despairing as Tim snapped his leg at first base this season, just when we thought the rotation was coming together for the playoff run. Mostly I'll remember that there was no better guy to have on the mound at home than Tim. He would absolutely dominate inside Turner Field, and his stats over the last 3 years, 22-9 with a 2.96 ERA at home, speak volumes about his success.

Still, we have to wish Tim farewell, and soon we'll have to do the same with his battery-mate Brian McCann. It's going to be one of the youngest teams in baseball playing in 2014 for the Braves, and the leadership role will have to fall to guys like Freddie Freeman and Jason Heyward. After all, the last connections to the 2005 division winning Braves are all gone. It's time to start a new streak.