The Braves are your 2013 NL East Champions! Party time! Confetti and champagne all around! It's been 8 years since the Braves have claimed the top spot in the division, and they finally wrapped it up on Sunday by beating the Cubs and having the Nats lose to the lowly Marlins. 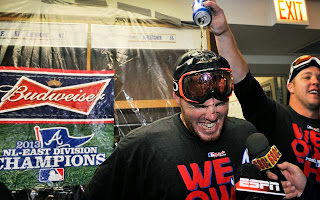 There's our boy Freddie getting doused with a frosty beverage in front of the logo. Nice work on the goggles guys, they do nothing! I won't bother really going into the finer points of the Cubs series because honestly, who cares now that we won? The race is over, and we're on top of the division. Now it's just about getting the gravy of home field advantage. There was some good and some bad and some ugly in this series with the Cubs, and I'll recap them all here:

The GOOD: Duh, we won the division. Oh, and we won two out of three in the series. Also, Freeman and CJ went on an unholy tear through the Cubs in these three games, notching a combined 10 hits, 7 RBIs, 3 homers, and a double. Those guys are going to be your go-to hitters in the playoffs, make no mistake. You need the rest of the lineup to step up around them, but I don't think there can be any doubt that if you need a clutch hit, you want Freddie or CJ in the box.

The BAD: The bullpen wasn't good at all. We're used to them being so good all season long, but in this series they gave up 4 runs in 3 games out of the pen. That's not acceptable for a team getting ready to start it's true first playoff series in a few years. Part of this is injury, part is fatigue, and part is simply bad timing. However, they need to lock it up and get the job done when the lights get brightest in October.

The UGLY: Dan Uggla got 6 ABs in the series and went 0-6 with 4 Ks. BJ got 4 ABs and went 0-4 with 3 Ks. They can't play in the playoffs, period. I don't want to see either of them get a single game. As far as I'm concerned, they are officially on the DL and unable to perform. Nobody wants them there, nobody needs them there, and from this point forward Elliot Johnson is your starting 2nd baseman, and Jason Heyward is your starting CF with a possibility to slot in Schafer if you don't want to play Gattis in left. Done. End of story. We're out of patience and they are out of time. Better luck next year, Dan and BJ, get out your pom-poms because you are cheerleading in the dugout from now on.

That being said, two things will make or break the Braves in the playoffs this year. I harp on the first one all the time, and that's RISP hitting. We're the worst team that's going to make the playoffs in the NL in that category. The second is starting pitching. We're 4th out of 5 in that category of starter ERA. Let's be real about our chances, a lot of things are going to have to go right for us, and to get those things, we HAVE to be at home. Our home splits are so ridiculously favorable, that to lose home field advantage would be a massive shot to our chances. The Braves can't let up now, no matter what. Get out there and go win those games to take that home field, or a lot of us will start getting very nervous when that first game rolls round.