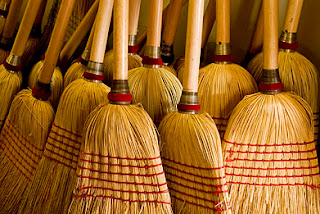 Wait, are those the brooms? In this series? Wow, what an effort by the Braves this weekend to really cool off one of the best teams in baseball. The friendly confines of Turner Field have really helped our lineup step up and be counted amongst the best home field advantages in all of baseball. There are a few things I want to highlight about this series. First, Fredi G finally woke up after game one and moved Simmons out of the leadoff spot. This is the best thing for everyone, including Simmons. Heyward shifted over into the leadoff spot for games 2 and 3, and he went 2/7 with 2 walks and 2 RBIs. That's much more productive than what Simmons can do, simply because of the walks. The second thing was watching Chris Johnson absolutely rip the ball for 3 days straight. CJ went an unheard of 7/10 on the series with several RBIs and runs scored. He was almost a one man wrecking crew at the plate, setting the table for several guys to come through with RISP hits. Third, how absurdly good was the pitching? Minor only gives up 1 run, Teheran pitches a shutout, and Medlen only gives up 2 runs. Add to that 7 runs of bullpen work without a single run. That's just an outstanding group effort.

All those things culminated in the Braves outscoring the Cardinals 11-3 on the series. That's an old-fashioned buttwhooping, no matter how you look at it. The good news is that the Braves ticked another series off the calendar, continued their good home work, and maintained an 8.5 game lead over the Nationals with 57 games to play. The bad news is that some will want to make more of this sweep than it actually indicates. This team is good at home, and we knew that already. This team has done well against good teams at home, and we knew that too. What we do is use this as some sort of bizarre "yardstick" on how well the Braves can do in the playoffs. That's a different animal and even the best of coaches and managers will tell you, the playoffs are a crapshoot. The best team doesn't always win. The hottest team with the luckiest bounces usually does win it all. And you can't know who's hot and/or lucky until you get to the last few weeks. This was a good win in July.

Game 1 was the one I expected to come unravelled, and Mike Minor absolutely proved me wrong. In prior outings with the Cardinals, he had been absolutely shelled. However, in this particular game, he managed to get through 7 innings with only 4 hits and a single earned run. The run came off a Molina homer in the 2nd that gave the Cardinals the lead. Old Mike Minor would have flipped out and self-destructed. New Mike Minor looked cooly back at the umpire and asked for a new ball. Then he went on to shut down the rest of the Cardinals lineup. The Braves quickly rallied around him with the help of a CJ single that plated McCann, and then Minor helped himself by knocking in Uggla. Heyward also added some icing to the cake with a 411 foot solo smash to center, and Joey Terdo had an RISP base knock to make it 4-1. I think it's important to note that we brought in Terdo in a lot of odd situations where I wouldn't normally expect to see a rookie pinch-hitting. My gut says that we're featuring him as trade bait. Something to keep an eye on down to the trade deadline.

Game 2 was boring. Both pitchers were featuring their best stuff, which was fine, but these are two of the supposed best offensive talents in all of the NL. For 8 innings, we essentially watched to dueling drivers trade paint in a race. Nobody could get anything going at the plate, and the Cardinals only managed 2 hits total. TWO HITS. Has that ever happened to them before? The Cardinals had been shut out only 4 times prior, and this was the second lowest hit total for them all season (the Pirates 1 hit them in a 5-0 win in April. I honestly couldn't believe what I was watching as the game kept going back and forth with not even a single baserunner. In 7 innings, only 2 guys got to third base on either team. Frankly, that's not much fun to watch as a fan, especially when it's YOUR team that shows signs of breaking out before they hit into double plays. Simmons hit into 2 double plays that killed rallies before he finally made right by smacking the game-winning double to left center that scored Freeman and McCann. To say the game was boring was because it happened to be a two way street from the pitchers. Just assessing Julio Teheran's performance alone, he was masterful. The kid is really coming into his own and living up the potential I saw in him coming out of spring training. He's a more savvy pitcher now who can get the key strikeout when he needs help. That's huge for controlling damage, and it was huge in keeping the damage low and batters off balance all Saturday long in Game 2.

Game 3 was just fun to watch. When you're sitting on 2 wins already, I dub these the "gravy games" because winning would be just that. Atlanta put on a show offensively, slugging 12 hits, 5 runs, a double, a homer, and they went 4-7 with RISP. Makes you feel tingly all over doesn't it? Medlen got a lead, then did his typical Medlen "oh boy" inning where the Cardinals tied it, and then the Braves bats lifted him up. Also, how about Kimbrel getting 3 saves in a row off these guys? K-Crab came in there in Game 3 and mowed everybody down on 8 pitches. Yikes! I'd hate to be one of the pitiful souls that has to face off against that man when there's more than a run on the line. He just goes for the throat when there's a bigger margin. This game was also about some terrific defense by the Braves. Simmons helped in 3 awesome double plays, and Freddie Freeman made a spectacular falling over the dugout railing grab in foul ground to end an inning. The whole team really picked a good time to start making big plays in all facets of the game.

What's not to love? 3 days of great baseball and 3 wins in a row! Now the Braves welcome Colorado to town for 4 games, and the Rockies hold a rather ho-hum 20-29 away record. Colorado slugs .390 on the road compared to .450 at home in that launching pad, so I think the Braves statistically have less to fear from the long ball than they would in the Rockies. Series preview is next.