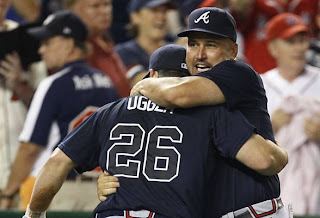 How can I quantify pure joy? Last night's game comes pretty close. From the beginning of the game when Tommy went into a complete tailspin, I was furious. He'd taken what was supposed to be one of the pitching duels of the year and screwed it up in the first inning! I couldn't believe it. It got even worse when we got to 0-9 down in the 5th. I was going to turn the game off, but for some reason I couldn't. The game was too big. I couldn't believe we would go out like a bunch of punks in one of our more anticipated games of the year. And we didn't! This team can take my emotions from unadulterated fury to supreme joy in a matter of hours.

I'll start by saying that Hanson couldn't have a worse game than he did yesterday unless he got struck by lightning. Four innings, 8 runs, 4 walks, and 2 homers. Of all the times to pull that nonsense, this wasn't the game to do it. Strasburg was probably laughing to himself in the dugout after the 5th inning, up by nine, wondering what he was going to have for dinner after the game. Thanks to his bullpen, the answer was a big ole turd sandwich. Even with Kimbrel blowing his first save in a long while, the bullpen on our side managed to hold things together pretty well. Martinez, EOF, Medlen, and Durbin all put together 5 scoreless innings that we desperately needed.

The MVP of the game was Dan Uggla. It feels so great to say that. I called him out at the beginning of this series, and said I was willing to write him off if he couldn't step up on the biggest stage. Boy, did he deliver. Dan was on base 5 times with 3 hits and 2 walks, swiped a bag, and he scored four runs in the game including the winner. When we needed him the most, he was there to produce. But it wasn't just Dan when you're down 0-9 and come back. Bourn, Prado, Chipper, BMac, Heyward, Freeman, and Janish all had RBIs in this game. It was a full team effort to pull our chestnuts out of the fire.

We can thank the Nats bullpen for completely melting down and giving us SIX 2-out RBIs. In four innings of relief, the Nats gave up 7 runs. It started with Drew Storen who came into the game and gave up 2 runs without recording an out. Then, Burnett gave up 2 runs, and Clippard gave up 2 runs. At that point, the snowball was rolling furiously downhill and it had already crushed Strasburg's hopes of getting a decision. By the time it was done rolling, it would take the rest of the Nats team with it.

Yesterday, you got to see what happens with Brian McCann and Dan Uggla both get hot at the same time. It's glorious. If that's the case in all our games, we are division champion caliber. I have absolutely no qualms saying it. The rest of this lineup is very good and we've been waiting for them to pick up the pieces. With Bourn and Prado continuing at the top, Chipper contributing when he can, Freeman and Heyward staying on top of their game? You put Uggs and BMac in there and you've got the most dangerous 1-7 lineup in the NL. No doubt.

Today is the double header. In the immortal words of Terrell Owens, "Getcha popcorn ready."