Words can't really do a game like this justice. Everyone watches baseball and becomes a fan of a team because of games like the one last night. Sometimes you get rewarded as a fan when you least expect it. Sometimes the grizzled old vet on the team turns back the clock to when he was a spry 28 year old. Sometimes you bear witness to greatness on a random Wednesday in May. 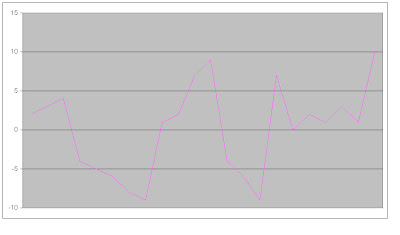 This crappy chart represents my emotional state throughout the game. Zero means I'm completely unsure what will happen. Ten means I'm positive we will win. Negative ten means I'm about to throw a shoe at the TV. As you can see from this simple chart, I went through large swings of emotions throughout the four hour plus duration. I was unfit to be around normal humanity last night during several innings. Those are noted by the bottom points of the graph. I'm sure if you were watching, you were the same way.

There were 28 runs in the game, so in a lot of ways I think we can toss many of the numbers out the window. Most of the things you saw in that game will never happen again this season. McCann probably won't hit another grand slam to tie up a game. Chipper probably won't have a walk off homer in the 11th. Hanson hopefully won't have 95 pitches in 3.2 innings. Halladay won't give up 8 ER in a game. The bullpen won't give up 9 runs. Durbin won't have another win. And the Phillies won't score 13 and lose.

Simply put, we never gave up. Prado was 3/6 with 3 RBIs. Chipper was 3/6 with 2 RBIs. BMac was 2/6 with 4 RBIs. Pastornicky was 3/4 with an RBI and 3 runs. Heyward was 1/1 with 2 RBIs and 2 walks. With all of that going on, with all the action on the ball, and with all of the insanity that was that game, one Old Gray Mare simply outraced everyone else for the MVP. Undoubtedly, it was Chipper Jones who walked off that field with the best finish of his career, by his own admission.

What can we take away from this game other than the fact that Chipper Jones is made out of concentrated awesomesauce? Probably that we should stop walking the leadoff guy. That would be awesome. Oh, and that mental toughness I was worried about with this team? Don't worry about that anymore. I think we all know that we can win in any situation now.