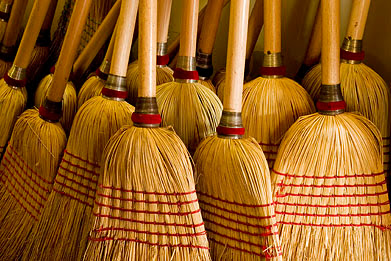 BROOOOOMS! How great is it to see them twice in one road trip? Hell, when's the last time we swept two teams on the same road trip? I have no idea. Let's see what my stats robot says! Robot says September 2009 when we swept the Mets and the Nats on the road in September. Needless to say, it's been a while. I love that we are going out there and beating teams with our offensive prowess. It's so very un-Braves-like, and yet I'm glued to the TV every game expecting us to come up big late. Not that I wouldn't be glued to the TV if we were losing 10-2 as well. I'm sick like that.

The way the game started, I was very worried. We worked Lynn over for 28 pitches and got runners to 1st and 2nd, but we ended up stranding everybody with the dreaded strike-em-out, throw-em-out double play. Tommy takes the mound and can't find the zone, period. He walks Furcal, walks Jay, and then lets them both steal their way to second and third. So with runners in scoring position, I'm thinking we're going to let them draw first blood, let Lynn have an early lead, and he will just shut the door on us. WRONG! Tommy fans three in a row including Carlos Beltran, and he wriggles off the hook. It was huge, and it was a tone-setter for the game. The Braves weren't going to do anything quietly. They were going to scrap and claw and take every AB deep into counts. That's what sealed the win for us.

So who gets the MVP? In the vein of being scrappy, one guy jumps to mind. Jason Heyward had one of those beautiful ABs in the 3rd inning that you want to put in the hitter archives. With the bases loaded, Jason fouled off six pitches before doubling to right and clearing the bases. Suddenly, we had a 3-0 lead against a pitcher in Lynn who had yet to give up more than one run in any inning this season. Jason rattled his cage, and got Lynn completely off balance. He was afraid to throw the breaking ball because Jason was sitting on it, so he was trying to find the zone with a steady diet of fastballs. Jason wouldn't have that. Foul after foul finally set the pitch that JayHey could pounce on and drive to right. For that AB alone, Jason earned the MVP for this game.

Now it's time for the crowd favorite: STAT OF THE SERIES! For this series against the Cardinals that stat is...DOUBLES! The Braves had 11 doubles in this series. Eleven...doubles. Uncanny. We were wearing out that right field corner all series long. A lot of those longer balls had so much spin on them, they were bouncing up into the stands for ground-rulers. Before this weekend, we were averaging 1.5 doubles a game. In these three games, we averaged 3.67 doubles. If you're looking for a reason why we scored so many runs against the Cardinals, that increase in doubling explains a good portion of it.

All in all, we had a 7-2 road trip. I'd call that pretty successful. It's odd that our two losses came against the Cubs, but like a good story, I can forgive a crappy middle for an great beginning and an outstanding finish. This week we start a strange home stand where we play a 2 game series against the Reds, and then 2 against the Marlins. Then, it's back on the road for another 7 days against the Rays and the Reds. Lotta road games in May. In fact, 16 of our 28 games this month are on the road. Normally, that would be concerning, but the Braves are an MLB best 14-8 on the road so far this season. The only team that's in the same stratosphere as us is the Texas Rangers. That's some high cotton we're wandering around in.

Oh and did I mention we're leading the NL East now? Yeah, it's May, blah blah blah. As I told my friend, I LIKE LEADING, DON'T STEAL MY SUNSHINE! Let's bring that powerful offense back here to the Ted tonight and show the Reds a few things.