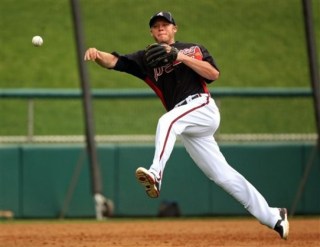 For those of you that followed spring training at all, you probably heard about the competition at SS between Tyler Pastornicky and Andrelton Simmons. The fact that there was a race at all for the starting job was due to Pastornicky's lack of hitting production during the spring. Some people in the media world started to panic and Tyler's stock began to drop quickly when he went 2-22 at the plate. There were questions about him arriving too early and assuming too much by taking a low number for his jersey. In other words, it was typical media hand-wringing over nothing.

Yes, he started slow in spring training, but I will point to the stretch in the middle of training when he was getting 3-4 ABs a game. Those are the kind of numbers you will see from him in the regular season. Starting on March 11th through March 25th, Pastornicky hit the ball very well for any player, rookie or otherwise. He had a .343 average, 5 runs scored, 3 RBIs, and only 2 strikeouts.

Now will Tyler hit .343 this season? Absolutely not. He's a rookie, and in all liklihood Freddy G is going to have him hitting in the 7 or 8 spot for most of the season. He will go through the stretches where he will slump. He will have trouble with certain aspects of his swing. He will have to make adjustments. However, I believe it's entirely reasonable that Pastornicky can put up a .260 average this season, and provide some clutch ABs when we need rallies late in the order. Frankly, that's more than we can ask for from a rookie SS, who needs to be primarily focused on learning the position at the top level, and honing the quick turn for double plays.

Is he the starter of the future? I can't say that this early. My gut says he certainly has the skills and quick hands at the plate to make this interesting. Also, he can leg out a triple fairly easily with his speed. I would love to see him swipe a few bases if he's in the 8 hole while the pitching flails around up there. I will say this, though. I have a lot more faith in him playing well this season and producing some key moments than I did during the spring.
Posted by Ben the CPA at 10:31 AM