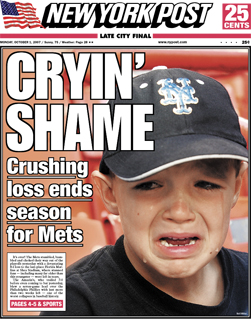 That's right. I want to feast on their tears. Getting swept was painful and put everyone in this town into panic mode. Now it's our chance to inflict some pain, and show those stupid Mets fans (who you know will show up at the Ted) how terrible they really are. Here are your matchups:

Short version: love the first matchup, hate the second, love the third. Slightly longer version: Gee is terrible with a 5 ERA this season, Santana is absolutely filthy right now, and Dickey got lucky against us once. I think Hanson has a good thing going, I still don't trust Delgado yet, and JJ is continually improving along with our offense.

Some keys to victory: For the love of everything holy, PITCH AROUND DAVID WRIGHT! The man is batting over .550 right now. Hell, just throw at him, it'll save time. Also, stay away from Daniel Murphy and Ruben Tejada. Abuse Ike Davis, Jason Bay, Scott Hairston, and Justin Turner, who are all batting under .250 right now. Also Duda Dooooodaaaaah, is striking out a ton, so you can work him over if you don't leave it out and over the plate. Did I mention to not pitch to Wright? DON'T PITCH TO WRIGHT!

Also, can we shore up the errors, please? That was embarrassing in New York. I couldn't watch that game without the Benny Hill music playing in my head as we tossed it haplessly about the infield. Stop that.