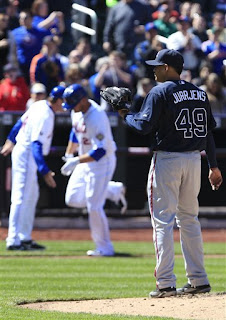 I'll just go ahead and lump these two games together because I don't think they are worth discussing individually. Let's go ahead and bottom line this series. We got swept by the Mets in New York. There are more humiliating places to lose a series, but not many. The problem in these two games was our pitching, and that scares the heck out of me as a fan. I can only hope that our starters get it together a little as we travel to Houston, because we need them to go deeper into games if we hope to win.

I'll break these two games down into my favorite triumvirate: The Good, The Bad, and The Ugly.

The Good - Jason Heyward showed up in these two games. As much as I dog the kid for playing poorly, I owe to him to recognize when he plays well. He had two hits, two walks, and two RBIs on only one strikeout in the two latter games. I'll take that all year long if he can keep it up.

The Bad - Jurjenns and Minor got brutalized by a bad Mets lineup. JJ only with 4.1 innings throwing over 100 pitches. Three runs and three walks in 4 innings is not going to win any games for us. Minor was even worse. 5 innings with over 100 pitches, and 6 runs with 4 walks. We're simply not being economical at all with our starters pitch counts, and that means stress on the bullpen. Want to know why we collapsed last year? Overtaxed bullpen with no hits.

The Ugly - Brian McCann and Dan Uggla only have one hit apiece so far this season. If those guys aren't in the middle of the lineup producing some action on the ball, we're in for a long April. Uggla is trying to see more pitches and has already draw 3 walks, so there's a silver lining there. McCann, on the other hand, has just been a complete non-factor. His one hit was a meaningless solo home run in the last game. Maybe it will jump start him against Houston.

The Ugliest - I'm tossing in one more ugly because we got swept. Yes, I can do that, it's my blog and my rules. The Ugliest part of this whole series was that the Braves left 30 men stranded on base. That's right, we averaged 10 baserunners a game standing there looking woefully back at the plate while our hitters flailed in futility. Of all the trends I want to change, that's the biggest one.

So that's the facts, folks. We did not play like a good baseball team in New York, and the record shows it. Now, we head into Houston, who is coming off two wins in a row against Colorado. Let's hope that night games favor us better than day games.