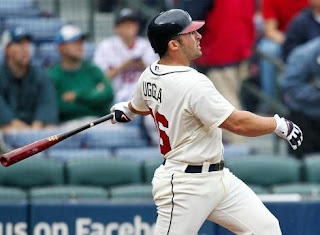 Wet weather didn't keep the Braves from sending the Mets back to Flushing two games lighter in the standings. If you liked runs, you loved these two games. As frustrated as I was with our hitting approach in game one of the series, I was that much more impressed with our patience at the plate in games 2 and 3.

Game 2 saw nine runs on nine hits, with a home run by Francisco in the 8th. Game 3 was even more explosive, with 14 runs on 16 hits, and 3 HRs by Francisco, Uggla, and Freeman. Our plate discipline knocked Santana out of the game in his shortest outing of his career, 1.1 innings. He had already thrown 55 pitches by the time he got the hook. That's what I meant when I said you have to let the Met's pitching staff hang itself.

Stat of the Series: RISP! The Braves were 12-24 in their two wins with runners in scoring position. For those of you who are terrible at math, that means we were batting .500 when people got on second or third. Such a stat is beyond exceptional when you are playing teams in your division, and will directly lead to victories if you can bat over .300 during the year with RISP.

As per usual, not everything was positive. What you have to remember as a fan is that offensive production in the short run can cover underlying issues. Eventually, teams go into slumps at the plate where they can only score 2 or 3 runs a game, and that's when those mistakes come back to rear their ugly head. The first concern this year is Jurrjens.

Jair hasn't pitched well. His two wins both had double digit run support, and his one loss came when the Braves could only muster two runs. JJ has never pitched more than 5 innings in his first three starts. His ERA is over 8.00, and he gives up 7 hits a start. He is giving up fly balls at an alarming rate, and he's walking almost a batter an inning. Is he hurt? Is he struggling due to some sort of hidden problem? I'm not sure. What I am sure of is that the JJ taking the mound right now isn't the guy we got to know from 2009-2011.

Another thing I'll continue to harp on is the errors. Two more games, two more errors. Our fielding sucks lately, and it's driving me nuts. The most ridiculous part is that if we didn't have an absolute savant at 1B making digs on some of these horrible throws? We could easily have 10 more errors this season. Unless you can absolutely club the ball and score 6+ a game on average, you can't be giving teams extra outs and extra rallies. That's exactly what our errors are doing, and it's not acceptable.

To end on a positive note, we crushed the Mets faces with a hobnail boot. It was glorious. The only thing more glorious would have been for the weather to cooperate, but you can't always get what you want. Mick Jagger taught me that. Tonight we start a West Coast turnaround against the Diamondbacks, who just dropped a game to the Pirates. It shouldn't be too hard for the bats to stay hot in Arizona.