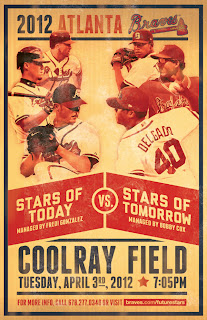 Last night the Braves faced off against an "Farm-Star" collection of talent from all the Brave A squads. The result was a game that over 10,000 fans attended and subsequently enjoyed until they got wet in the seventh inning. Even though the game was a rain shortened affair, the Braves beat the Farm-Stars 4-3, and everyone seemed to enjoy watching Bobby Cox manage the young guns. Personally, I wanted Bobby to get tossed one more time, but I think the rain cost us that opportunity.

There were some positive things to take away from the game before we prepare for the Mets tomorrow. The first is that Dan Uggla is in ridiculous shape, and he clubbed a ball that still hasn't landed yet. The second is that our pro-players hopefully weren't taking their fielding too seriously, because Rossy and Freedman both had some really awful throwing errors. The last thing is that Prado, McCann, and Bourne all look ready to go. I'm extremely encouraged about our lineup from 1-5. That's the positive side.

The negatives from the game were only a couple, but they reinforce some of my concerns heading into the regular season. Jason Heyward went 0-3 with a strikeout and left 2 on base. Cristhian Martinez struggled, giving up a double, single, four pitch walk, and two runs in one inning. I'll come right out and say that I'm going to be hard on both these guys this season for different reasons. I'll be tough on Heyward because he either needs to put up numbers this season or get back in the minors until he can work out his swing. We've replaced a hitting coach because of him. We've put up with an extremely down year where one game of offensive production would have made a world of difference. I'm tired of RF being an easy out in our lineup (dare I say Frenchy?). He needs to change that, and it has to happen this year.

As for Martinez, I take a dim view of getting a DUI as a professional player. You have the resources to get a nice car to take you home, so use it. I felt the same way about Lowe, and I'm not sorry he's gone. Martinez isn't some young, dumb kid, either. He's a 30 year old player. He better perform well, keep his nose clean, and stay out of bars if he plans on getting into his car. Otherwise, the Braves will outright release him.

Some highlight players from the Farm-Stars: Edward Salcedo, a possible 3B prospect, managed to steal two bases and score on a heads-up baserunning play, and Matt Chaffee, a young lefty, struck out the side by retiring McCann, Uggla, and Heyward in the fourth inning.

All in all, it was a positive way to end Spring Training, and I think the fans really enjoyed this experiment. If it were up to me, I'd say they should continue to do it every year, hopefully without the wet weather and hopefully with Bobby Cox insulting the umpire's parentage after a questionable call.

Tomorrow, a preview of the Mets series in NY, and a deeper look into what we can expect from Tyler Pastornicky this season at SS.
Posted by Ben the CPA at 10:23 AM