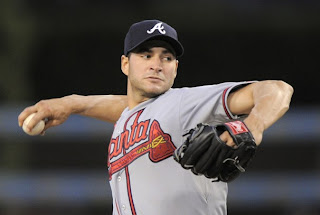 Let me open the door into the mind of my own madness. It's 12:40 in the AM. The Braves have managed to post only 4 hits all game going to the 9th inning down by a run. I am exhausted after three straight nights of staying up for these games. Things look bleak. In desperate need of a rally, I grab my red foam tomahawk I got during the last playoff series against the Giants at the Ted. I don my lucky Braves hat. I then commence to rally chop by myself in my study as Prado comes up to bat. We needed it! Martin flies out, so I immediately switch from my right hand to my left hand for the chop. Right hand wasn't working! Must change! Then, like a lone snowball that trundles down a snow covered hill, the rally begins...

Those are the moments I live for with Braves baseball. Is it absolutely crazy? You bet your ass it's crazy. I don't care! We needed all the positive vibes we could get in the wee hours of the morning. Five straight hits in a row later, we were leading the game 4-2, and Kimbrel came in to shut the door on the Dodgers. What could have been a 1-2 series suddenly became 2-1, and a 5-2 road trip out West. Those kind of road trips define the regular season for great teams, even if it is only April.

The MVP of this game is without a doubt Dan Uggla. I expected him to come up big, and he did. He gave us a 1-0 lead in the fourth with an RBI single that knocked in Freddy Freeman. Then, in the ninth with the game on the line, and down two strikes, he went the other way on a bloop single to tie it up. He was 2/3 on the night with 2 RBIs, a run, and a walk. Without his production, the game would never have been close. Freeman gets the honorable mention nod for going 2/4 with 2 runs scored. Beachy also gets a nod for going 6.1 innings with only 2 earned runs, even when he was in some major jams. Venters and Kimbrel only had a ho-hum 5 strikeouts in 2 scoreless innings. Those guys make it look simple.

Now for the Stat of the Series! This series stat was...2-OUT RBIS! In our two wins, both Dan Uggla and Martin Prado had huge 2-out RBIs that helped us win those games. Nothing is more clutch for our team and more demoralizing for the opposition than plating runs when a pitcher looks like he is going to wriggle off the hook. It's something we didn't see enough of last season, and it really shows a mental toughness to hang with an AB even when the chips are down.

I can't be the only fan out there who is excited we are coming home. These late nights are hell on the fans when we play on the West Coast. Luckily we only do it twice a season. We head into a four game series against the Pirates at home, a team that's 3-6 right now on the road. Last year, we had the epic late inning game where umpire Jerry Meals decided that we should win. What will happen this year? I wouldn't mind taking 3/4 of from these guys. Let's make it happen!