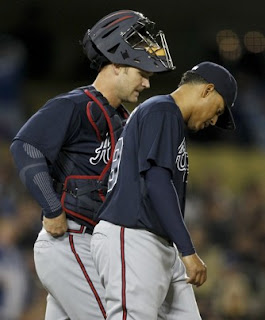 Jurrjens was optioned to AAA after this game. If you knew nothing else about the loss, other than the fact it was really late and 2-7, that would be enough to tell you it was a horrible start. JJ only went three innings, gave up 9 hits, 5 runs, a walk, and couldn't strike out my grandmother. Although, I'm not sure that's a great benchmark since my grandmother is a depression-era farmer. She's a tough out. Very pesky with a good eye. Makes a mean fried chicken and coconut cake, too. Where was I?

Oh right, we lost. I believe you can adequately describe JJ's failure yesterday by saying he had no movement on any of his pitches. Fastballs were simply coasting across the plate at belt level. Changeups weren't changing. Sliders were hanging. In the third inning, the Dodgers hit two balls so hard I thought for sure they were gone, but the park barely held them. One was so close that Jason Heyward was touching the wall as he caught it. At certain points you could see where Rossy was setting up for the pitch location, and Jurrjens was missing it by more than a foot. It was like a live version of batting practice out there, with about as many fans in attendance as you'd expect. More on that later.

For those who know baseball, you know it's probably not a good thing that Livan Hernandez had to come into the game to clean up the mess. By the top of the 5th inning, the Braves were already down 5-1, and that might as well have been 12-1 given the type of mental momentum in the dugout. One of the issues with our team is that we seem to be tied to the first three innings, good or bad. The stats don't lie. In every single one of our losses, we were tied or losing by the end of the third inning. In all but one of our wins, we were leading after the third inning. The simple conclusion is that if we don't start hot and take the lead, our team hangs their heads and says, "WE'RE NEVER GOING TO WIN!" My advice to fans, if we aren't winning in these late games by the end of the third, you're probably ok going to bed.

The situational hitting wasn't there last night. We had 7 hits, but the only ones that scored runs were Uggla and Rossy's solo homers. As a team we were 0-6 with RISP, and we stranded 8 runners. Considering we were only down by four runs for the majority of the game, any kind of action in those situations would have done wonders in rallying the team. The Dodgers, on the other hand, went 6-11 with RISP. Oh, and did we pitch to Kemp like I said not to? You bet we did! He had two hits and a walk. Eithier behind him had 3 hits. Juan FREAKING Uribe went 4/4 with 3 RBIs! The guy hadn't had a hit in a week prior to that.

So enough about that. We lost, and we'll deal. JJ will go to the minors and work out whatever the hell is wrong with him. I'm going to go on a small tangent here about the Dodgers fans. In case you haven't noticed, Dodger fans, you have a new $2B ownership group, and you're the best team in the National League. Maybe you might want to mobilize that tiny town of 18 million people and put some butts in the seats? That stadium was half-empty last night, and it was painfully obvious. The listed attendance was 26k, and there's no way it was over 20k. For all the crap Atlanta takes about fans not showing up, I don't want to see any stones flying out of glass houses on the West Coast, ok?

Tonight, we have a very winnable matchup between Minor and Harang. Get out there, score some early runs, and let's get this series tied up. My coffee will be brewing for tonight's matchup. Will yours?